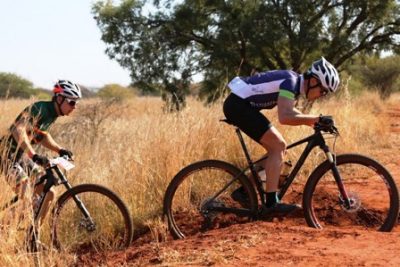 A bumper field can look forward to a fast and furious ride on pristine single-track when they take part in the Bestmed Sondela Mountain...

A bumper field can look forward to a fast and furious ride on pristine single-track when they take part in the Bestmed Sondela Mountain Bike Classic at Bela-Bela in Limpopo on June 24 and 25.

“The trails are in the best condition ever,” said chief course designer Mel Meyer, whose team are in the final stages of preparing the 20km, 40km and 60km routes.

He said a lot of time went into gaining access to the 15 farms that the event traversed, planning the routes as well as dealing with challenges such as game fencing that encircled most of the properties in the area.

“We believe we have a winning route,” said the self-confessed mountain bike addict, who felt they were privileged to be granted access to the properties once a year.

“We have had a very good rainy season and the bushveld looks beautiful. It is really a nice ride and you need to take time and enjoy the scenery.”

Meyer said the 60km feature race on the Sunday featured a manageable 544m vertical ascent and started off with a climb.

“You’re going to work hard for the first 20km. It’s not leg-breaking; rather a gentle incline that takes you through some very scenic places.”

From there, he said participants would be rewarded with some downhill action as they entered a beautiful valley on the aptly named Verloren Estate.

“We only have access to it once a year. Riders will follow some amazing downhill stretches until they get to the Greyling farm, from where they will continue descending into the river bed.”

“After that, it is all downhill back to Sondela.”

Although the feature event’s route was mostly single-track, he was not concerned about bottlenecks as he believed the gentle uphill start on jeep track would stretch out the field.

“Once they’re on the single-track, there are about three-and-a-half kilometres before they enter the next section of jeep track. This will give those looking for a chance to pass ample opportunity to do so.”

He said their philosophy for the Bestmed Sondela Mountain Bike Classic was to create routes that would challenge top riders without scaring off weekend warriors.

“There is no horizontal climbing and that adds up to fast riding and routes that are suited to all abilities. It really is an experience to behold and the perfect winter ride to keep the legs going.” According to him, participants could expect to spot game species such as warthog, impala, zebra, wildebeest, nyala and eland along the way.

According to him, participants could expect to spot game species such as warthog, impala, zebra, wildebeest, nyala and eland along the way.

The 40km and 20km rides on the Saturday take place within the boundaries of the Sondela Nature Reserve and only features 186m and 100m of climbing respectively.

Entries close at midnight on Friday, with proceeds going to the Sondela Wildlife Rehabilitation Centre.

Go to www.asgevents.co.za for more information. of the country is a summer rainfall area, and this makes for great game viewing opportunities.