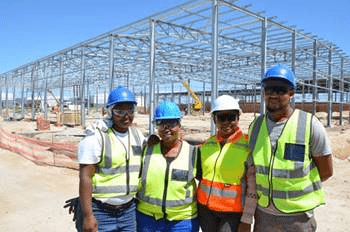 The projects, which have brought about much needed jobs in the economy of the Eastern Cape, have culminated in the creation of no fewer than 192 construction jobs thus far.

Having experienced limited to no economic activity during the earlier levels of the South African government national lockdown.

These jobs have come at a time when many families are struggling to make ends meet.

With infrastructure forming a key part of South Africa’s economic recovery plan, special economic zones (SEZ), such as Coega, have a role to play in stimulating economic growth & job creation.

The projects, which form part of the EC’s economic priority sectors, include:

The Multi-user phase 2 located in Zone 3 of the Coega SEZ is currently under construction with over 151 construction jobs created thus far.

The 7000m2 facility is a replica model of the successful phase 1, which is now fully occupied.

It seeks to provide affordable industrial space for many small-to-medium companies, especially entrepreneurs wishing to grow their business.

Since the establishment of the multi-user facility, it has provided local people with employment in the construction industry.

One of those people is Siphokazi Xakana (33), a building student from the Coega Skills Centre and who is currently a brick layer at the construction site: “The skills I have obtained during my employment on this project have assisted with the grow I need as a young female in a male dominated industry.”

EMPOWERING GROWTH AND DEVELOPMENT IN THE REGION: Workers at the construction of the plant: Siphokazi Xakana (33), Ntombizodwa Hem (35), Nelisiwe Madlodlongi (27) and Edgard Fransman (29)

Echoing similar sentiments on growth is Edgard Fransman (29) from the Northern Areas who is currently a General Worker on the project.

He highlights that getting a job has seriously enhanced his career ambitions.

“The experience and exposure I have obtained from the multi-user facility construction particularly in steels structure has enhanced my skills set.”

Lastly, Ntombizodwa Hem (35), from Wells Estate who works as an Administration Assistant on the site is excited for the Coega opportunity: “I am gaining a lot, every day I learn something new, which is good for my career. I value the opportunity granted to me and the chance of being able to provide at home.”

Another project under construction is APLI, a 264 million project, which will see the development of fruit packaging facility, fruit cold storage and a container depot.

All handling, packaging and exporting citrus fruit that is proudly produced in the Province.

The project has to date has created over 147 jobs in construction and a further 14 SMMEs having benefited.

WORK IN PROGRESS: Construction of the R264 million APLI project

The last of the three projects is the DHL Logistics Facility, which will occupy a total of 11400m2 and will see the development of a warehouse and offices.

The project is estimated to create 380 construction jobs and further SMME participation.