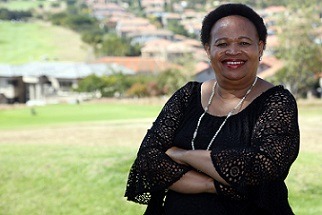 East London real estate entrepreneur Xoliswa Tini is to expand her 15-year old business to other provinces later this month and become the first...

The University of Cape Town graduate says that key role players like investors and developers are excited about the development and see opportunity for a strong black African brand with a nationwide presence.

Fifteen years later Xoliswa Tini Properties is a tried and tested brand, with massive possibilities of growth and this, in turn, means opportunities for black entrepreneurs,” explains Tini.

The business has had a good run and now has footprint in East London, King William’s Town and Gauteng with over 70 agents and 12 permanent employees.

But it is the difficulties that she faced as one of the first black agents in the city, that has helped Tini create a compelling vision for the business and the drive to leave legacy for other black entrepreneurs and address the market schism in the industry.

She explains that only eight per cent of the more than 50,000 registered estate agents in South Africa are black, an improvement on the four per cent in 2007 but nowhere close to the target of 35% that was meant to be achieved by 2012.

This doesn’t come as news to Tini who understands the challenges for new entrants.

“This is a commission-based business so entrants need to be financially-sufficient for anything around six months.  In addition, they need workplace experience and a supportive mentoring and training system,” she explains.

“That’s why we established an accredited black academy in the Eastern Cape which provides NQF 4, NQF 5 and RPL training and workplace experience,” she says.

But the Burgersdorp-born Tini explains that “we need to find ways to address ownership and for me, this means franchising.”

“Franchising does make a business more accessible for others – so too the chances of its sustainability – particularly if it is a successful brand,” she says.

“For me, franchising means those who are coming behind me will more easily be able to overcome the difficulties of the industry.  I don’t want others to experience what I did,” she says.

Tini’s interest in the industry came perchance when she began looking for a home for the family in East London’s suburbs in 2001.

“From the start, there weren’t any black agents to help black families find homes. But what really piqued my curiosity was seeing how other people lived.  I was fascinated by beautiful homes, different settings, lovely gardens and all it takes to live in the northern suburbs of the city,” says Tini.

But she almost gave up on her newfound passion for property.

“No one of the existing agencies wanted to take me at the time except one franchise where you had to pay your way.  I did and made sure that I gave great and “memorable” service. Through hard work, I helped my colleagues sell faster and so my network grew. Before long I was the top agent,” she says.

Her battle in the industry, however, continued.  After establishing XTP, Tini received little support from her mainly white counterparts. Instead she faced derogatory phone calls and underhand tactics but that did not deter her.

But Tini has put that behind her and is focusing on the future.

“Now the priority is keep building a brand that is noticed – and supported – by developers, home owners and investors,” she says.