22-11-2011 -Transnet Port Terminals had cause to celebrate this month when they hit record level for container handling performance both at the Port Elizabeth... 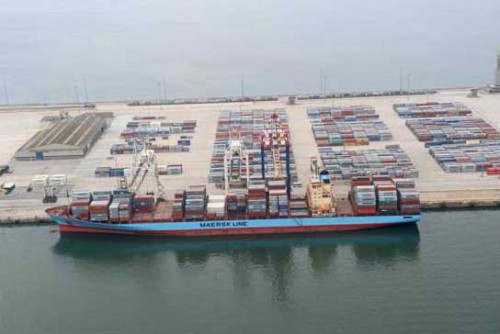 22-11-2011 -Transnet Port Terminals had cause to celebrate this month when they hit record level for container handling performance both at the Port Elizabeth and Ngqura Container Terminals.

A steady increase in the region’s performance has been experienced from 25 gross-crane moves per hour (“GCH”) in August to 27.6 GCH during September and October 2011. While Ngqura Container terminal achieved 29.3 GCH in October 2011. The highest number ever achieved in one shift in one day was 42.7 GCH at Ngqura Container terminal whilst Port Elizabeth’s highest in November was 35 GCH. The high performance is attributed to the improvement in planning of yard and waterside activities as well as engagement with key stakeholders including employees, clients and stevedoring companies to ensure alignment in planning. In addition, weather related delays have decreased due to smarter planning on how to deal with weather-related challenges.

The Terminal Executive Manager: Eastern Cape Region, Mr Siya Mhlaluka, praising his staff’s performance, indicated that GCH is a measure of productivity in the container handling business and reflects the number of containers each crane moves per hour. Mhlaluka said that these figures are a direct reflection of TPT’s on-going efforts and determination in providing World Class performance to serve and grow the South African economy.

Transnet Port Terminals performance is constantly measured against international port terminal norms and standards. “Given that the ‘accepted’ world-class standard is in the range of 26 to 30 GCH, Ngqura and Port Elizabeth have demonstrated that we are up there with the world’s best. We are however not about to rest on our laurels but will continue to effect business improvements to drive enhanced productivity and efficiencies in our operations. These figures create confidence in the equipment, planning, operational processes and people working at our terminals”, said Karl Socikwa, Chief Executive of Transnet Port Terminals.