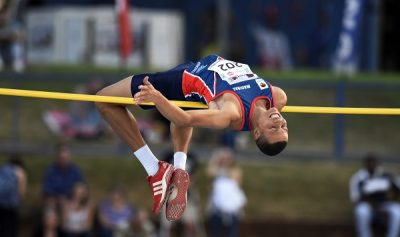 Bestmed NMMU-Madibaz high jump star Garth Ellis ticked yet another box when he took a silver medal at the USSA Championships in Cape Town...

Bestmed NMMU-Madibaz high jump star Garth Ellis ticked yet another box when he took a silver medal at the USSA Championships in Cape Town last weekend.

“My plan going into the season was to break the Varsity Athletics record and to medal at both the SA senior and USSA champs,” said the human movement sciences student after his jump of 2.10m.

Ellis started the season off in fine form when he jumped 2.05m to bag gold at the first Varsity Athletics meeting in early March.

The lanky Madibaz athlete secured another gold when he cleared 2.12m – bettering the record by a centimetre – at the second meeting of the series a few weeks later.

He went even higher last month when he equalled his personal best of 2.15m at the national champs in Potchefstroom – an achievement that secured him the bronze medal.

“Now that I’ve equalled my PB I’m hoping to improve on it in the next few competitions,” said Ellis, who hails from Holland Park in Port Elizabeth.

“I’ve put a lot of effort into achieving all of this so it’s a nice feeling to have accomplished everything I wanted to this season.

“At the end of the day it’s all worth it because it shows that my training is paying off.”

Despite having had little to no formal coaching, Ellis said he had taken advice from a number of coaches to improve his technique.

He said working with his sprint coach, Gerrie Posthumus, had been especially helpful.

“I’ve been doing high jump since I was in grade eight at Andrew Rabie High, but there are no specialist coaches in the Eastern Cape so I’ve mostly had to coach myself.

“I’ve done a lot of research and also made sure to listen to pointers from other athletes and coaches when I’ve taken part in meetings.”

Ellis, who dreams of winning the national and USSA championships, said his next goal was to compete at the World Student Games in Taipei in August.

“I need to find an extra five centimetres to qualify,” he said.

“Although my ultimate goal is to one day make the Olympic team, I also have to focus on the smaller goals like jumping 2.20m.”