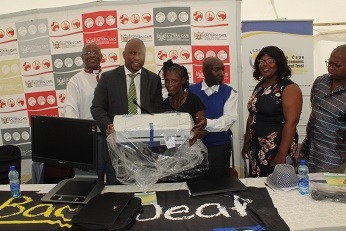 The Dimbaza based Eastern Cape Braille and Print Institute received a shot in the arm for their printing business when the Eastern Cape Economic...

The Dimbaza based Eastern Cape Braille and Print Institute received a shot in the arm for their printing business when the Eastern Cape Economic Development, Environmental Affairs and Tourism MEC, Lubabalo Mabuyane delivered a state of the art multi functioning braille set as part of the international day of people with disabilities today (Monday, 3 December 2018).

The Eastern Cape Braille and Print Institute, a cooperative owned and managed by people with disabilities has division-printing posters, documents and other material into braille and employs 100 staff members.

Nomava Gungqa, the center’s Project Manager said the center has two divisions; a cooperative, which prints documents into braille, knitwear and produces perfumes, and a non-profit entity, which provides social services to the local persons with disabilities.

Gungqa said braille printed material is only found in Grahams Town, Efata, Khanyisa and in the Amathole and BCM side, there is no entity producing braille material and as a result of this people who are blind struggle to read documents not printed using braille.

“We know that people who are blind are unable to read documents dished out during events and newspapers. Now that we have this new multi functioning machine, we want to expand our work and print prices for retail stores so that they have product prices printed in braille so that when people who are blind go shopping they are able to read the prices of products on their own so that they are not robbed during shopping. We also want to translate newspapers into braille so that we can also read them but we did not have machinery,” said Gungqa.

She added that before they got this new machine they used parkins brailler, which is a manual machine unable to make photocopies while they can produce more than 500 copies using the new multifunctioning braille machine.

“The new machine will improve our business. We provide braille printing for the premier’s office, other provincial government departments and municipalities in the province,” said Gungqa, adding that getting the new braille machine means they will now be able to convert books into braille to make money while blind people access more information than before.

“This Institute is one of the three projects identified to benefit from the program we are implementing in partnership with the Economic Development, Environmental Affairs and Tourism department to benefit people with disabilities. We also identified glass-recycling center, Vuyo James in Aliwal North and offices for Deaf SA. They needed a braille printer and we provided the software, printer, translator, computer and this machine can produce high volumes of documents printed in braille. They will use this braille machine to generate revenue for their business by selling services to government and municipalities who are required by law to have braille documents,” said Phethuka.

He added that the Institute had a duty to teach blind people how to read braille and they did not want this braille machine machine to gather dust but for it to be used to benefit local people with disability.

Speaking in Dimbaza, Mabuyane, who said the machine will helps scores of people who depend on braille printed material to access information for their own development, called on government departments to include braille printing when they produce documents to empower blind people with access to information.

Mabuyane used the event to rebuke destruction of public property during community and labour dispute protests, closing of water taps and switching off of electricity during strikes by municipal workers, saying this bad behavior must stop.

Currently limited braille-printing services are provided by a Grahamstown based South African library for the blind and entities outside the Eastern Cape province, making Eastern Cape Braille Printing Institute the first braille printer in the province to print high volumes of braille documents.