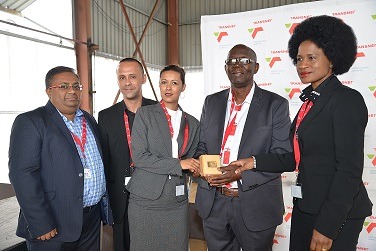 The Black, woman-owned family company, has a Broad-Based Black Economic Empowerment (B-BBEE) Level 1 status and scooped the contract through a competitive tender process in which the contractor satisfied all technical, B-BBEE and price evaluation criteria.

Delivering the keynote address at the ceremony, TNPA General Manager: Infrastructure and Port Planning, Hamilton Nxumalo, said the new vessel is the first of its kind to be built for TNPA in South Africa.

“As Transnet, it gives us great pride that we are able to promote Radical Economic Transformation, localisation and supplier development through such procurement programmes.

“Catering for larger commercial vessels in our ports requires a world-class dredging and marine fleet – and South African shipbuilders continue to demonstrate their expertise in producing vessels that can compete with the global industry,” he said.

Carl Gabriel, Executive Manager for TNPA’s Dredging Services, added: “The plough tug is the latest acquisition in Dredging Services’ R2 billion-plus fleet renewal programme, which has already seen the delivery of some of the continent’s most powerful dredging vessels in recent years. The plough tug is used as a bed leveller, smoothing out high spots created by marine traffic in the high-volume berth areas. This is a critical activity in keeping the ports’ berths to their promulgated depths.”

As the first milestone in the history of a ship, the keel-laying ceremony marks the laying of the large beam around which the hull of a ship is built.

In line with maritime tradition, a commemorative coin was placed underneath the keel of the plough tug during the ceremony and welded into place by the shipbuilder – a tradition said to invite good fortune during construction and the life of the ship.

Tide Marine Shipyard provided a Mandela coin for this purpose, as a nod to the Eastern Cape Province’s most noted son, former President, the late Nelson Rolihlahla Mandela.

General Manager of Tide Marine Shipyard, Fabian Crocker, said: “This project will go a long way towards revitalising Nelson Mandela Bay’s boat building sector and we are grateful to Transnet for the trust they have placed in a smaller, but well-established player in the industry.

“All of the steel – around 200 tons – to be used in this project will be sourced from within South Africa. We will be creating up to 30 jobs in technical fields such as engineering, boiler making and welding. We will also be upskilling local marine engineering students with on-site experience so that learnings from this project can continue to serve the industry even long after completion,” he said.

Naval architecture firm, Naval Africa, will provide technical expertise and quality assurance on the project to support the shipbuilder.

Previously based in East London, Tide Marine Shipyard relocated to Port Elizabeth after securing a back-of-port lease from TNPA for premises in the Port of Port Elizabeth. The company was awarded the plough tug contract in October 2016 and initial work kicked off in September 2017.

The as-yet-unnamed vessel is expected to be handed over to TNPA Dredging Services by October 2018.  It will feature the latest global technology and will be able to sail from Port to Port, which is an added advantage over the old vessel it replaces.

In the next few months, the plough tug will be relocated from the contractor’s workshop to the port’s recently upgraded 40-ton slipway and boat hoist in the Yacht Club precinct, where its accommodation and final fittings will be added.

Port Elizabeth Port Manager, Rajesh Dana, said the plough tug project bodes well for the port, which is being developed into a thriving boat building and repair hub to support the fishing industry and recreational craft. This is in line with Government’s Operation Phakisa: Oceans Economy programme in which TNPA is a lead implementing agent.