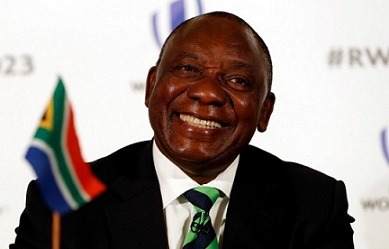 Cyril Ramaphosa6
President Cyril Ramaphosa has urged the Department of International Relations and Cooperation (DIRCO) to use its diplomatic presence in the world to attract investment...

President Cyril Ramaphosa has urged the Department of International Relations and Cooperation (DIRCO) to use its diplomatic presence in the world to attract investment and facilitate greater volumes of trade.

President Ramaphosa also underscored the significance of DIRCO “as the face and mirror of our country”.

The President said this on Tuesday when he visited DIRCO head offices at Oliver Tambo House, in Tshwane, accompanied by Director-General Cassius Lubisi.

He was received by DIRCO Minister Lindiwe Sisulu and Deputy Ministers Llewellyn Landers and Reginah Mhaule.

“Today’s engagement took the form of an extended briefing by DIRCO to President Ramaphosa on South Africa’s foreign policy priorities and key international engagements that will form part of the President’s schedule in the coming months,” the Presidency said in a statement after the meeting.

The occasion also gave President Ramaphosa an opportunity to meet the political leadership, senior management and staff, the Presidency said.

DIRCO is trusted with the formulation, promotion and execution of South Africa’s foreign policy. The department has one of the biggest contingents of diplomats in the world, with 125 diplomatic missions in 107 countries located in all corners of the world.

“President Ramaphosa underscored the centrality of DIRCO – as the face and mirror of our country – in solidifying South Africa’s position in the region, continent and the world and sustaining the pursuit of a better South Africa in a better Africa and a better world.”

Minister Sisulu committed that DIRCO would in 2018, as the year of Founding President Nelson Mandela’s centenary, advance regionally, continentally and globally Madiba’s values of resolving international disputes through peaceful means.

The visit is as part of President Ramaphosa’s commitments made in the State of the Nation Address in which he indicated that he will be visiting the national departments to engage with the senior leadership to ensure that the work of government is effectively aligned.

This is part of the President’s new dawn approach — visiting where public service should undertake their responsibilities with efficiency, diligence and integrity. Where tasks are done with new discipline, correctly, completely and timeously.

CAPTION:President of the Republic of South Africa, Cyril Ramaphosa