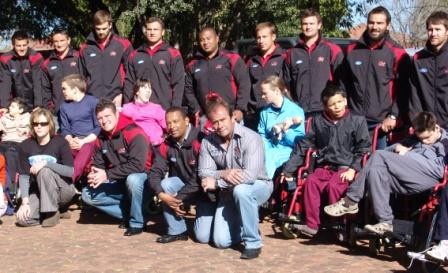 Ford Motor Company of Southern Africa (FMCSA) has a longstanding relationship with South African rugby having earlier this year announced its sponsorship of the Puma Rugby Team. Now known as the Ford Puma’s, Mpumalanga’s provincial side teamed up with FMCSA staff for a special visit to the Horizon Care Centre in Silverton.

The Horizon Care Centre provides a training centre for 32 disabled children and in some cases has even assisted disabled adults. The centre is not Government subsidised and therefore relies on generating funds through school fees and donations. FMCSA has a longstanding relationship with the school with staff collecting clothing, stationary, food and toys for them while also visiting the children on a weekly basis.

On 25 August 2011, the children on the Horizon Care Centre were in for a real treat when the Ford Puma Rugby team and staff from FMCSA arrived at the Centre to spend the morning with them. With the 2011 Rugby World Cup just around the corner, the visit created a lot of excitement among the children. Though the Ford Puma team so often serve as role models for young children on this occasion the team learned a lot about perseverance and courage from the children at the Centre.

The team spent the morning talking to the children and their teachers. They also spent time outside taking some of the wheelchair-bound children out for a walk. While the children were clearly excited by the visit, the occasion proved moving for the Ford Puma team and the FMCSA staff who were humbled by the joy and passion demonstrated by all the children.

“The Horizon Care Centre is a charity close to our hearts,” says FMCSA General Manager Nicho le Roux. “The Centre has been going for 30 years and does exceptional work but they need a great deal of support and we at Ford visit the school on a weekly basis doing our best to aid them in their efforts.”

FMCSA has taken on a number of projects to make the children’s lives a little easier. The staff raised funds to pave and paint the school, they’ve organised parties, collected food, they also encouraged suppliers to get involved by renovating the school bus with specially designed seat belts to secure children in their wheelchairs, re-upholstering and re-carpeting the bus and securing new tyres.

“Our staff, suppliers and sponsorship partners have been so moved by the work done by the Horizon Care Centre that they have joined us in supporting them, making the lives of these young children a little brighter,” concluded le Roux.