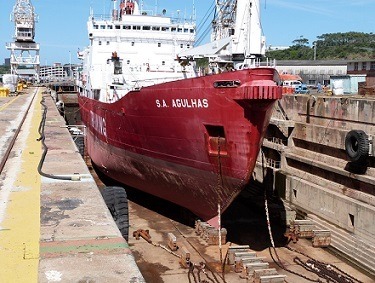 The SA Agulhas is back in the Port of East London’s Princess Elizabeth Dry-dock (East London dry dock) for her lay-up maintenance plan after...

The SA Agulhas is back in the Port of East London’s Princess Elizabeth Dry-dock (East London dry dock) for her lay-up maintenance plan after her previous visit in 2013.  This time a refurbished dry dock welcomed her with improved facilities.

The contract to undertake maintenance on the 40-year-old vessel was awarded to local ship repair company, East London Shipyard, and should take between four to six weeks to be completed during April. Work includes repairs and maintenance on the bow and stern thrusters, tail shaft, steering gear, compressors, cranes, deck machinery and hull.

“The dry-dock is also undergoing refurbishment and the project is at an advanced stage with R21m invested to date and 70% of the work completed thus far, including new switchgear and crane rails,” said Carls.

“Work commenced in 2015 with a phased approach being followed to enhance all critical components and allow for the dock to be functional throughout the upgrading process,” he added.

The SA Agulhas is the fifth commercial vessel to make use of the dry-dock over the past six months. She was one of the star attractions at last year’s East London Port Festival, as well as the People’s Port Festival in Port Elizabeth earlier in the year.

The vessel, which is the South African Maritime Safety Authority’s (SAMSA) dedicated training vessel, returned from a three-month trip to Antarctica at the end of February. Altogether 20 cadets, enrolled in the national cadet programme managed by the South African International Maritime Institute (SAIMI), obtained experience on this Antarctic voyage, counting towards their sea time to obtain their STCW certificates of competency. More than 40 scientists from the Indian National Centre for Antarctic and Ocean Research joined the cadets on this expedition to carry out oceanographic research.

Sharon Sijako, recently appointed East London Port Manager, said attracting more ship repair business to the port was an essential aspect of the new aggressive strategy to expand the port for the benefit of the region.