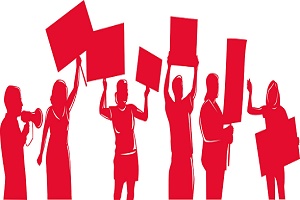 A historic strike is looming at Productivity SA, the government agency mandated and dedicated to promote employment creation and growth, as well as the productive capacity and productivity of enterprises of the country. As a Public Entity Productivity SA’s ultimate purpose is to contribute to South Africa’s socio-economic development and global competitiveness.

Productivity SA is established in terms of section 31 of the Employment Services Act, No. 4 of 2014 as a juristic person and an Entity of the Department of Labour (DoL) reporting to the Labour Minister, Mildred Oliphant. Productivity SA is governed by a tripartite Board consisting of business, labour and government. Productivity SA discharges its responsibilities through sterling programmes that focus on research, providing information, training, facilitation, advisory services, auditing and monitoring productivity issues.

These programmes engage South African productivity issues at all levels, from sophisticated best practices models designed to boost the efficiency of private and public enterprises, through to the teaching of productivity awareness to school learners. Productivity SA has offices in Midrand, Durban and Cape Town.

In an ironic move that is in stark contrast to its primary mandate, Productivity SA and its staff members have reached a deadlock in wage negotiations and strike action is pending. The South African Parastatal and Tertiary Institution Union (SAPTU) have been issued with a certificate enabling for a strike by the Commission for Conciliation, Mediation and Arbitration (CCMA). A strike by Productivity SA will be a first for the organisation in its 45-year existence.

The South African Parastatal and Tertiary Institutions Union (SAPTU) says Productivity SA initially offered members a 0% salary increase whereas SAPTU demanded an 8% increase. SAPTU unanimously rejected the offer made by management and argued that the 0% offer means in effect a real cut in salaries while disregarding the increasing cost of living and the rising inflation and that the salary increase should reflect the impact of real inflation on the workers.

Following deliberations at the CCMA, Productivity SA upped its offer to 5%, way below inflation, while SAPTU, in the spirit of reconciliation, adjusted employees’ demand down from 8% to 7.2%. SAPTU cited the following reasons for its demand namely:

Productivity SA stuck to its offer of 5%, resulting in a deadlock. Productivity SA employees union, SAPTU is affiliated to Federation of Unions of South Africa (FEDUSA), which is the largest politically non-aligned trade union federation in South Africa and represents a diverse membership from a variety of sectors in industry. Employees of Productivity SA have never gone on a strike before, but this is an unprecedented show of frustration over what SAPTU deems as a financial crisis at Productivity SA exacerbated by mismanagement as highlighted in relevant audit reports.

The financial crisis is a contradiction to the address by Minister of Labour, on the occasion of the budget vote of Labour, Parliament, Cape Town (24/05/2017) where she said “The funding model for Productivity South Africa has evolved over many years. I am pleased to report that the current funding model has been revised to the satisfaction of all parties and as such, all the challenges of the past have been resolved”. The strike action could result in a total shut down of services in Productivity SA’s offices based in Midrand, Durban and Cape Town.