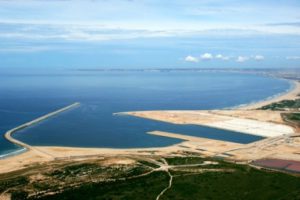 14-06-2013 -The two Algoa Bay ports – Port Elizabeth and Ngqura – handled a total of 2.235 million tonnes of cargo last month, according to figures made available by Transnet National Ports Authority.

The figures show that in May the Port of Ngqura handled 1.164 million tonnes of cargo, compared to 435 000 tonnes in the same month last year.

The May 2013 figure is higher than the total cargo handled by Cape Town, placing it fourth in terms of the volume of cargo handled after Durban, Richards Bay and Saldanha Bay.

In May 2013, the Port of Port Elizabeth handled 1.071 million tonnes of cargo compared to 984 000 in the same month last year. As far as twenty-foot equivalent (TEU) containers are concerned, the Port of Ngqura handled 86 118, making it second only to Durban (216 175) and comfortably ahead of Cape Town (69 896). Ngqura is being position as the country’s transshipment hub for sub-Saharan Africa.

As far as East London is concerned, the figures show that the port handled 120 000 tonnes in May this year compared to 227 000 in the same month last year.

The volume is likely to increase if Elitheni Coal meets the new deadline for the export of coal through the port of the end of June/early July as announced earlier this month.

The port handled 5 117 TEUs in May this year which was slightly less than the 5 349 in the same month last year.