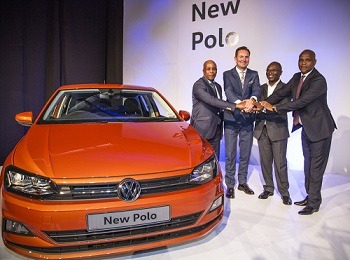 Department of Trade and Industry14 Volkswagen Group South Africa8
Volkswagen launched its new Polo and showcased the R6.1 billion investment in its plant and new products, in the presence of Eastern Cape Phumulo...

Volkswagen launched its new Polo and showcased the R6.1 billion investment in its plant and new products, in the presence of Eastern Cape Phumulo Masualle, the honourable Deputy Minister Bulelani Magwanishe of the DTI, media representatives and key stakeholders.

In August 2015, VWSA Chairman and Managing Director, Thomas Schaefer announced an investment of around R4.5 billion rand in new product and facilities. The total investment exceeded R6.1 billion rand, which is partially due to exchange rate fluctuations and the approval of additional plant investments.

The majority of the investment spend was on Capital Expenditure for production facilities, local content tooling, quality assurance and manufacturing equipment as well as Information Technology upgrades.

Localisation remains a key priority for VWSA, with the new models at a 60% local content level, with on-going plans to achieve higher levels.

Volkswagen introduces the innovative One-line Concept for the first time as part of the investment; traditionally vehicles are assembled on unique production lines.

It has always been possible to build derivatives of the same platform on one line, but to build two completely different platforms on one line is a technical challenge, highly complex and requires new thinking and training for the employees.

Volkswagen is the only vehicle manufacturer which has the words “car” and “people” in its name. This remains relevant and true today.

In line with being a socially responsible employer VWSA did not release any employees as the production volumes decreased during the ramp up, but rather retained them in training pools until the third shift commences in April, this year.

This will include not only right hand drive markets but also to some left hand drive markets, especially for the Polo GTI. Maximum annual plant capacity is expected to be reached with a 3 shift operation of some 160 000 vehicles, in 2019.

Basic economic fundamentals and an investor friendly legislative framework within a reasonably stable economic environment are essential when making major investment decisions for Volkswagen, as is a stable and attractive automotive policy.

“The South African Government must be complimented, firstly for the introduction of the MIDP, which gave confidence to the industry and provided a stable base for the successor programme; the APDP which has also been successful in ensuring a future for the automotive sector in South Africa.

The Automotive Sector of the South African economy accounts for approximately 7.4% of the GDP and accounts for the direct employment of 113 000 people.

I am convinced that the next phase of the APDP will continue in the same vein and allow for continued automotive investment,” said Thomas Schaefer, Chairman and Managing Director of Volkswagen Group South Africa.

The Premier of the Eastern Cape Phumulo Masualle said ”The automotive sector is one of the key sectors in our provincial economy mix, which we believe, alongside the Oceans Economy, Agriculture and Energy, if correctly leveraged, can see the Eastern Cape Province not only grow the regional economy and contribute towards further national economic growth but also become a leader in the drive to modernise and re-skill our work force.

We are particularly encouraged by Volkswagen South Africa’s commitment to not only their continued and expanding investment in the South African economy, but also bold initiatives such as the announcement of an R86 million grant to SMMEs located in the manufacture and distribution space of automotive parts.

This is a clear signal of the private sector accepting that South Africa’s future prosperity will depend on the societal effort all of us are prepared to invest, not just Government.

We hope to continue our partnership to undertake a skills revolution in our province by jointly entering into training ventures so that we may be able to improve our skills base as an economy but also increase the employability and entrepreneurial prospects of our people.”

Deputy Minister Bulelani Magwanishe of the DTI commented “As the government, our commitment to local vehicle production is supported in our Industrial Policy Action Plan (IPAP); with a prime focus on adding value in the manufacturing and industrial sector.

Export promotion, job creation and inclusive growth remain as the fundamentals of this policy.

It is a privilege to commend VWSA on the launch of its new Polo and its investment of R6,1 billion. Therefore, this investment is particularly relevant to ensure expansion, socio-economic impact and the inclusion of Black Industrialists.”

“We also believe in the long term future of South Africa and Africa, for this reason the Volkswagen Group has created its fourth international region; the Sub Saharan Africa Region with VWSA being fully responsible for the region which will have substantial benefits for our company in South Africa.

I believe that there are truly unique opportunities for us as an industry that we need to grasp, specifically here. As the automotive industry goes through radical change with electrification, autonomous driving, digitalisation etc. we must be ready to grasp these opportunities in Sub Saharan Africa”. added Mr Schaefer

The Volkswagen Group retained its number one position in the passenger market for the 7th consecutive year in 2017, achieving a 21.8% market share. One in every 5 cars bought by South Africans last year is either a Volkswagen or an Audi.

The Volkswagen brand in the run-out year, of its volume models, the Polo and Polo Vivo achieved a share of 18.9% meaning that the Volkswagen Brand was the passenger market leader, even without its sister brand Audi.

The Polo Vivo and Polo have also been ranked the best selling cars in South Africa since launch in 2010.  That is for 7 consecutive years.

They are being replaced by the new Polo launched at the event and the new Polo Vivo which will be launched next month. “No doubt these will fare even better in the market in 2018 which we see increasing slightly too some 375 000 passenger cars from the 368 000 in 2017”, commented Thomas Schaefer.